Today we’d like to introduce you to Sir Sefton Brancker, whose love of Cross Country, the Civil Service and RAF, ensured his name would live on in the annual event he set up.

During the First World War, Sefton Brancker was a Major-General in the Royal Flying Corps. He was awarded the AFC (Air Force Cross) and later transferred to the Royal Air Force. By the end of the war he was Controller-General of Personnel on the Air Council in the rank of Air Vice-Marshal.

On his retirement in 1919 he joined the Civil Service to head the department set up in the Air Ministry to encourage the development of civil aviation. It was for this work he was knighted.

With a passion for athletics, in particular running, in 1928, Sir Sefton arranged an annual Cross-Country match between the Civil Service, Middlesex county athletics association and the RAF.

Sir Sefton initiated the event because of his great interest in the three associations: being a retired senior Air Force officer, an eminent Civil Servant and the President of Middlesex County AA.

The first event was held at RAF Uxbridge in January 1929, resulting in a win for Middlesex AA. And has continued for most years since.

Sadly, Sir Sefton was killed in the Airship R101 disaster at Beauvais in France, in the early hours of 5 October 1930. The airship was the hope for lighter than air flying and was on a trip to India to demonstrate its efficiency. After his unfortunate death, it was decided that the three associations would jointly provide a Challenge Cup to commemorate Sir Sefton, and to include Track & Field events in addition to the Cross Country race already being held*. The Ladies began competing for the SEAX Trophy for the first time in 1987.

Unfortunately, Middlesex AA withdrew from the event in 2009 and the Track and Field event was discontinued. But the Cross Country event is still held between the Civil Service and the RAF on an annual basis. 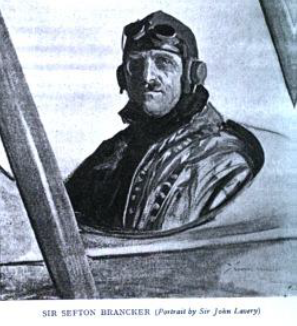 *With thanks to the RAF Website for this information.