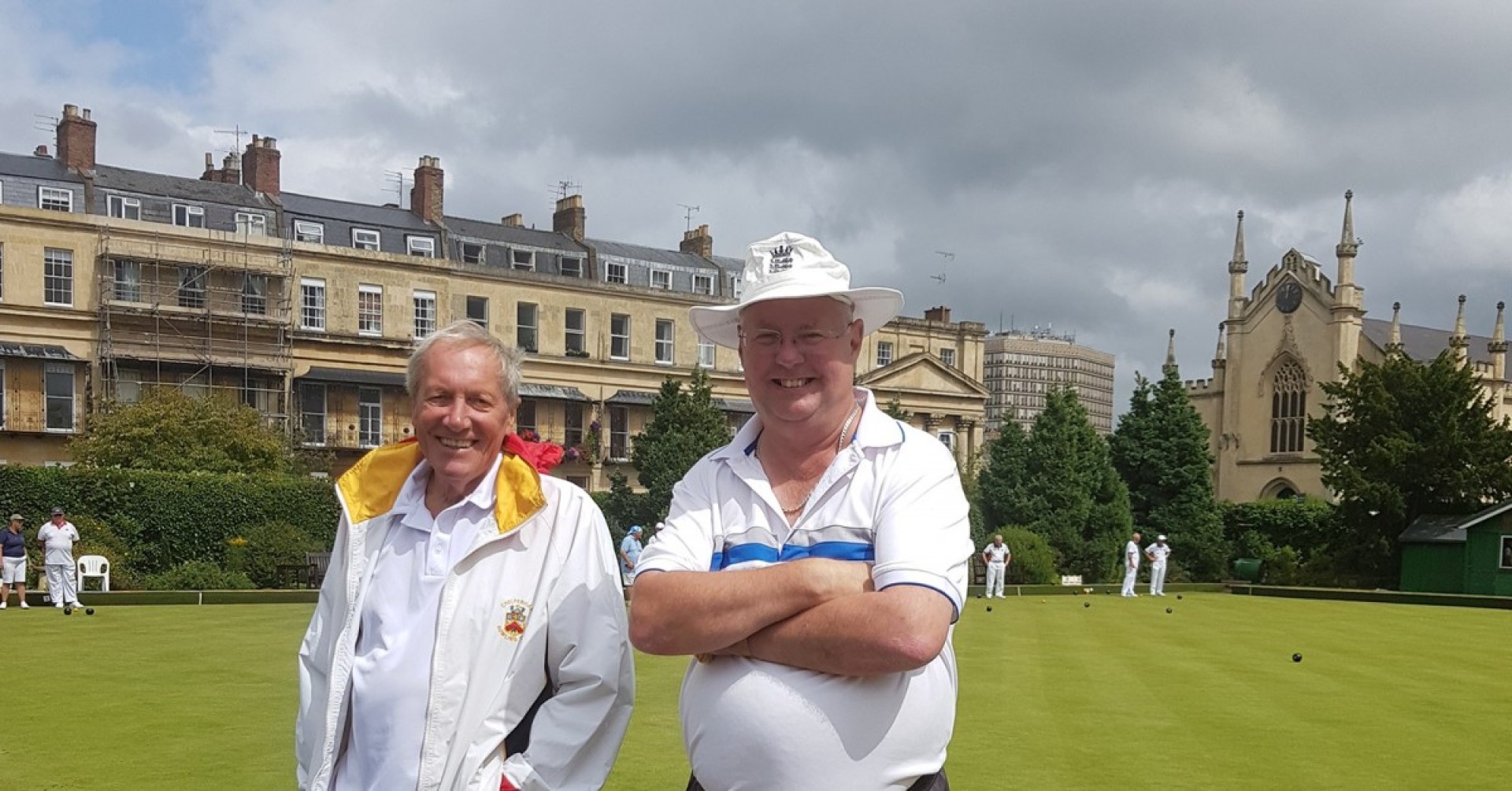 The sound of heavy rain overnight meant that I had a restless morning wondering whether the event would take place. An early morning e-mail from the Secretary at Cheltenham Bowling Club stating that the greenkeeper had been unable to cut the bowling greens due to standing water added to my fears.

On arriving at the green my first thoughts were to seek out the greenkeeper for his opinion and at what time did he think the greens would be playable. Apprehension soon turned to hope as my own inspection of the green showed that there was very little standing water on the surfaces and these areas were on rinks that we were not planning to use for at least the first two sessions.

With the agreement of the greenkeeper play was expected to get under way about 25 minutes later than anticipated so that left me with the small task of reducing the time limit on the group games and reprogramming the timetable.

Members from near and far

The event was to be staged over 5 qualifying games and then a final between the top two teams in the qualifying group. Each team’s opponents on the day would be determined by a pre event program and basically the luck of the draw on what number the team captain picked. Players had travelled from most parts of England and Wales to take part in the event with the standard of players varying from occasional Flat Green Bowlers to two current International players in Martin Selway (RCSL Raptors) and Chris Gale (HASSRA Fylde)

Once the captains had selected their numbers, the day opened with Martin Gale welcoming all the competitors to Cheltenham Bowling Club and he then announced the first set of matches. With the increase in the number of teams to 14, each session consisted of 7 matches. The matches were very competitive but also played in a friendly spirit and apart from the odd runaway victory most of the matches were very close and decided over the last couple of ends.

The final was to be decided between the top two teams in the group. With one set of matches to go  HASSRA Fylde and RCSL Essex were both still unbeaten, although with an aggregate shot difference of 41 HASSRA Fylde were almost certain to contest the final. However, their opponents could have been one of 5 other teams.

Previous winners RCSL Essex were in pole position but a defeat to the local Cheltenham team of CACSSA saw them drop to 6th place in the table. A win for CACSSA saw them move up to 3rd in the group and wins for HASSRA South East and HMRC Raptors saw them move to 4th and 5th respectively.

2nd place was finally filled by last year’s champions from HASSRA North West A, who in an earlier game had recorded a maximum of 8 shots on one end.

The final was therefore to be played between last year’s winners HASSRA North West A and HASSRA Fylde who had won the competition on 4 previous occasions.

Fylde in the lead

A change in play

HASSRA North West A then started to put pressure on and collected a very good 4 at the next end to get within 2 shots. HASSRA Fylde again scored 1 shot on the 12 end to go 3 in front, but the 13th end was the end that finally decided the game. With HASSRA North West A lying two shots, HASSRA Fylde’s skip, Chris Gale played a running bowl with his first to try and disturb the head. Hitting the target what seemed to be perfectly the only bowls that ran out of the head were the bowls from his own team. HASSRA North West were now holding 5 shots. Ian Burgess made another shot with his first bowl. With the pressure now on Chris Gale used his International experience to play a perfect draw onto the shot wood to lie second shot with an almost impossible chance of removing it.

I would like to congratulate the winning team of Chris Gale, David Moncaster, Chris McDermott and myself and commiserate with the runners up who were represented by Paul Holden, Alan Turner, Jackie Butterworth and Ian Burgess.

Next years competition is expected to take place on 7th August 2020 and details will be available on the CSSC website once the green has been booked.

My final thanks go to all the competitors on the day, at least we did stay mainly dry this year, all those connected to Cheltenham Bowling Club who helped out on the day and of course the staff at CSSC Head Office for allowing us bowlers play a competition in the sport we love.