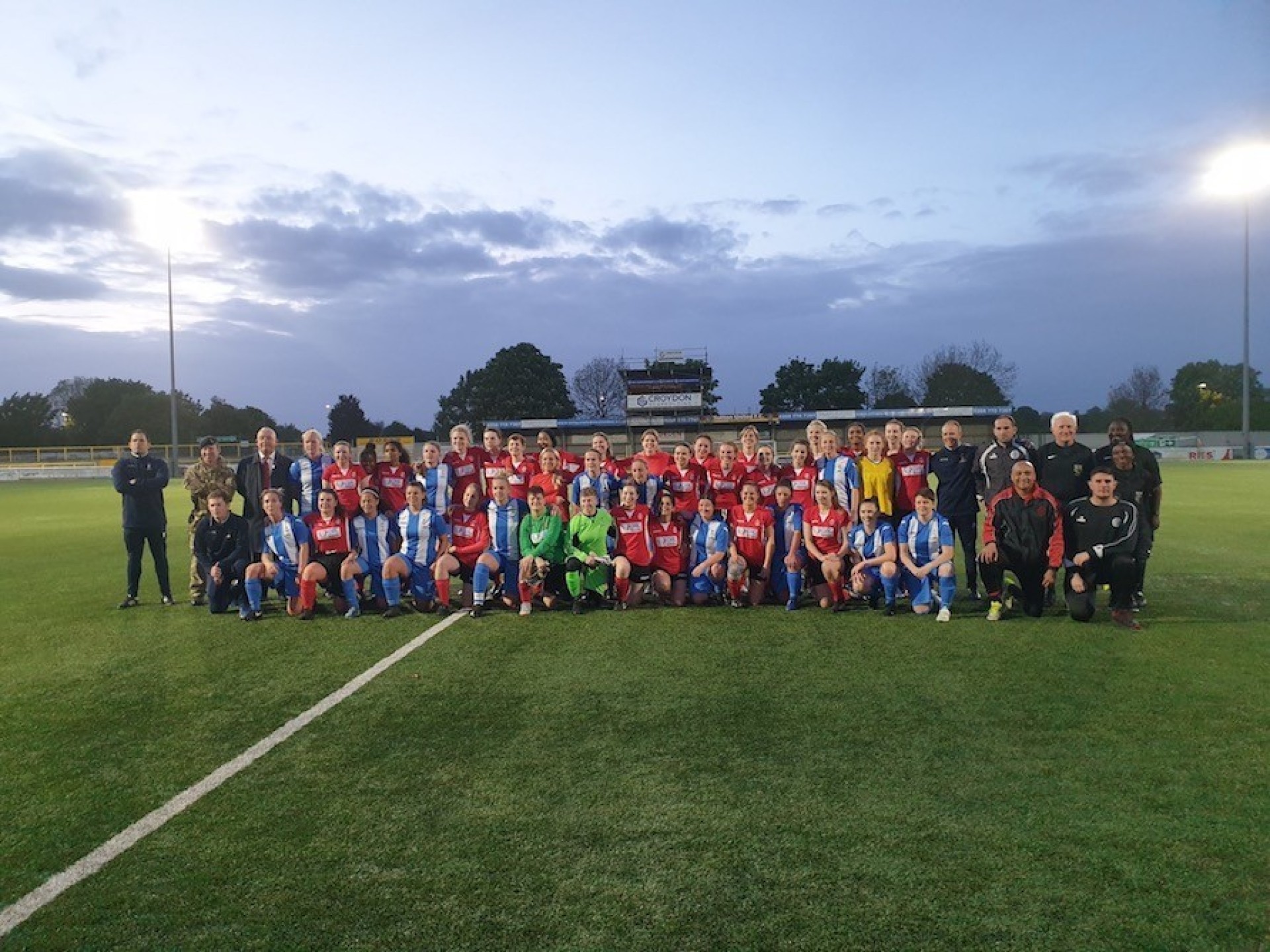 The Civil Service Football Club - the sole surviving member of the Football Association founded in 1863 - have experienced many milestones over their 150 year history. The Club have toured Europe and have beaten some of Europe’s elite clubs – including Real Madrid and Barcelona. But now, a new landmark event is set to decorate the Club’s illustrious timeline; the inaugural match of the Civil Service FC Women’s football team.

Taking place on Wednesday 8 May 2019 at Sutton United FC’s ground, the Civil Service women’s team took on the Royal Corps of Signals FC women in an entertaining game of football that was more than befitting of the prestigious occasion.

The Civil Service started brightly with energy and intent straight out of the blocks. An early through ball directed over the top of the Royal Corps defence was neatly slotted home by Civil Service’s star striker, Jasmine Williamson, within the first 5 minutes. After a good spell of defending and attacking on the break, the Civil Service had good chances to increase their lead – with Williamson spurning a couple of guilt edge chances – including hitting the post after rounding the Royal Corps goalkeeper.

After the early flurry of attacks from the Civil Service, the Royal Corps slowly grew into the game and dominated possession towards the end of the first half, with Royal Corps’ Number 11 a standout figure pulling the strings in midfield.

The half time break did not stem the momentum of Royal Corps, who continued to dominate the ball and pressurise the Civil Service’s defence. Paulina Sztaszka, the Civil Service goalkeeper, was forced to make a string of great reaction saves and last-minute interceptions to protect the Civil Service’s slender lead. However, the Royal Corps pressure finally bore fruit in the latter stages of the match with two quick fire goals, both neat finishes from inside the penalty area.

A tightly contested game, with some impressive football on display – both teams did the landmark event great justice.

If this game is anything to go by – and with their demonstrated enthusiasm, passion and integrity for the game - the Civil Service FC Women’s team have a bright future ahead of them.

We spoke to our contacts within the Civil Service Football team to get some insider information about their newly formed Women’s team.

How did you get the Women’s Football Team going?

After our 150th anniversary in 2013 and our match at Buckingham Palace we turned our thoughts to the future. Top of our to do list was the creation of a Women's team to offer football to female civil servants. In the first few years we struggled to attract enough players to make the creation of a team possible. In 2018 we managed to catch the eye of a member of the civil service fast stream who used social media to highlight that we were trying to create a women's team. The response was incredible. Never in our wildest dreams did we expect such a response with 60+ players getting in touch. Fortunately, CSSC were on board and provided a generous seed funding grant which enabled the club to provide top class facilities, high level coaching, and the correct kit and equipment to get things moving. It just grew and grew from there. We have players of all abilities from complete beginners to experienced players.

What makes the Team so popular?

The team is so popular because it is exactly that - a team! From day 1 it was instilled into the group that sport is competitive, hardworking and progressive, but most importantly it was about belonging to something that you can feel proud of, and the only way that would happen is if you enjoy yourself. The varied levels of ability that attended made it more interesting and allowed everyone to strive towards the common goal of making sure the group overall were prepared for competitive fixtures. The women's team have also fully integrated themselves into the club.

What does the Team hope to achieve in the near future?

The team will be going into the Greater London women’s football league from season 19/20. It is an exciting time for the club, and whilst we are ambitious in the long term, the early aim is to establish ourselves as a solid club, compete in the league and set the tone for years to come. Longer term we would like to progress through the leagues, introduce additional teams and continue to grow and become a real force in women’s football. We will also be entering several 6-a-side tournaments throughout the summer, and hopefully we will host our own as well.

How do you think the match went against the Royal Corps of Signals?

The Match against the Royal Signals exceeded expectations. The preparation was spot on and morale in the camp could not have been higher. The size of the squad was testament to the commitment of the players, however, playing 28 players in 1 game was never going to be possible. We started very well and adapted to the oppositions tactics early on. We went 1-0 up and were very unfortunate not to add 2 or 3 more before half time. The second half was harder. The opposition became more physical and fought hard to get back in the game and eventually equalized with 15 minutes to go. They then quickly took the lead in somewhat fortunate circumstances when they were wrongly awarded a throw in and they pounced quickly. We did not give up though, battling back and very nearly equalising but for the cross bar in the last couple of minutes. Post-match morale was high but the group were, and rightly, disappointed not to have won. But it was a great sign for what is to come for this group of players!